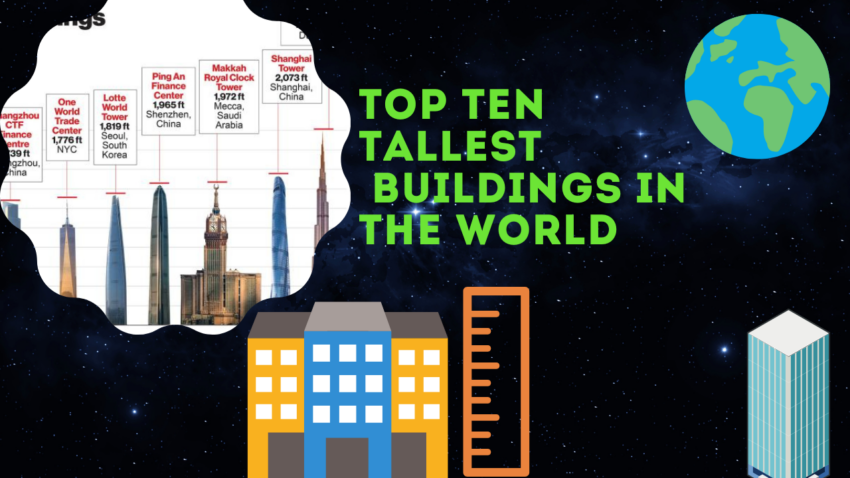 The name of the person who designed the building is Adrian smith, he had worked with Skidmore, Owings, and Merril

The second spot on the list of the tallest buildings in the world goes to Merdeka 118. This build took the China Shanghai towers place and is now on 2. place. The skyscraper was designed by the Australian firm Fender Katsalidis.

This Skyscraper is located in Malaysia. The 118 means that there are 118 floors in the building. That includes office space, a hotel, retail, and residential facilities.

The Shanghai tower was built in 2014 and took more than 8 years to finish; it cost more than 4.2 billion dollars. The tower has 258 rooms, a hotel and the world’s highest observatory deck wherein one can see the entire Shanghai skyline.

Abraj Al-Bait is based on 7 skyscrapers owned by the government of Saudi Arabia. The tower was constructed for tourists and pilgrims visiting the city. It took 7 years to finish the construction, and it cost 15 billion dollars.

Abraj Al-Bait is number four on then list of Worlds tallest buildings.

Ping An Finance Tower is the world’s fifth tallest and the second tallest building in China. It is located in the city of Shenzhen and is 599 Metres tall. It is built exclusively for Ping An Insurance company. Even though the building was inaugurated in 2015 but extended construction went on for a couple of years more till 2017.

The Lotte World Tower is South Korea’s tallest building that took 13 years to complete. It was inaugurated 4 years back in 2017 that is located alongside the banks of the Han River.

There are various observatory decks in this 123 floors building. The building is designed in such a way that it can withstand earthquakes measuring 9 on the Richter scale.

David Childs is the architect of this building who is known for designing famous skyscrapers like the Burj Khalifa and the Willis Tower.

Guangzhou Chow Tai Fook Finance Centre, also known as Guangzhou CTF Tower is located in the suburban area of Guangzhou, China. There are 111 floors in this building with 5 underground floors. It was inaugurated in 2016. CTF tower has 95 elevators that move at a rate of 44 miles per hour.

hotels, residential houses, and hotels in the tower.

Tianjin Chow Tai Fook Tower is China’s fourth-tallest building and the world’s ninth tallest building. It is almost the same height as Guangzhou CTF Tower however it was constructed after the Guangzhou Tower which is why it is ranked lower. The construction of this building was completed in 2018.

China Zun, also known as CITIC Plaza is named after an ancient vessel. This 108 floors building was constructed in two phases first in 2017 and then again in 2018. China Zun, the tallest building of Beijing was inaugurated in March 2019.