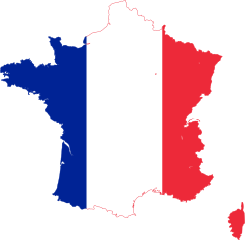 10: Basilica of Sacred (Heart of Paris)

Basilica of Sacred is a roman church, located at Montmartre hill, the highest point in Paris. It was designed by French architect Paul Abadie, the construction took place between 1875 – 1914.

This is a giant Ancient Roman bridge, that is located in the city of Rome, in Southern France. The bridge has a length of 50 kilometres, it was built in the first century. It is used by Romans to carry water from the Uzes commune of France to Nîmes.

They used: Yellow lime stones, breeze blocks and calcium deposits in the construction of this bridge. The height is 48,8 meters.

Arc De Triomphe is the most popular triumphal arc in Paris. The construction of this monument was ordered by French emperor Napoleon in 1806 to honor the warriors who fought with him in number of wars. It got inaugurated in the year 1836, construction had been stopped number of times after abdication of emperor Napoleon.

It is also known as the ‘grand canyon of Europe’, located in Alpes De Haute province in Southeastern France. This river canyon is about 25 kilometres in length and cliffs have a height of 700 meters.

The largest uncompleted chateau in Loire valley, within central France. It is the finest example of French Renaissance architecture. Interestingly the entire manor house is surrounded by the largest forest park in the nation. It was built for King Francois I as a hunting lodge. Now it is one of the popular tourist attractions and world heritage sites of France.

Starting the construction in the year 1519 it took 28 years for getting into today’s form. But chateau never gets completed by the wake of the French revolution. The internal section of the chateau shows off French and Italian style in a grouping of rooms together into a suite.

There are 440 rooms, 80 staircases and 280 fireplaces are within this chateau. It also features different types of towers and chimneys. The guided tour at the chateau offers the tourists chance to explore all important sections within the chateau, will also get clear information about the method of construction and design styles.

It is one of the most recognizable landmarks and popular religious sites in Europe, located on the island of Normandy. The island is best known for the abbey that occupies rocks 1 km in diameter. The abbey, church and monastery located in the top section of Saint Michel. The bottom section includes stores, halls, and houses. This site attracts more than 3 million visitors every year, another world heritage site of France.

One of the largest museums in the world, located in Paris. The impressive art collection of this museum makes it the most visited museum in the world. There are 35000 prehistoric objects, includes Egyptian antiques, crown jewels, old paintings and ancient sculptures.

The museum is actually a part of Lovre palace, a baroque-style palace that dates back to the medieval period. The  Louvre museum was opened for the first time in the year 1763. Later emperor Napoleon added a large number of number art worksorks to the museum. The contribution from following French emperors also increased the collection of historical objects in the museum.

Palace of Versailles is the largest palace of France, also known as chateau de Versailles. The first part of this palace was built by Louis XIII king in 1624 as a hunting lodge. Later Louis XIV, the successor of  Louis XIII expanded it as the largest palace in the country. The palace features 700 rooms, 2153 windows, 68 staircases and 2000 acres of the beautiful garden.

Nowadays palace of Versailles becomes the foremost tourist attraction of the country. It is also used for hosting several political functions. Inside the palace, the rooms have different sizes and styles, varies by the rank of power who lived there.

The hall of mirrors becomes the most important part of the palace to visit by the tourists, which diffuses the day daylight garden in the palace of Versailles has a French style, included 200000 trees, more than two lacks of flowers from various species and 50 fantastic fountains.

Disneyland entertainment resort opened in central Paris in the year 1992. As of 2014, it has been visited more than 275 million times by visitors, one of the most popular attractions in Paris. Disneyland covers an area of 4800 acres, it includes two theme parks, resorts, shopping and entertainment sections.

There are 57 rides, 62 shops, 5800 hotel rooms and 55463 employees in 500 different sections. Upon rides Pirates of Caribbeans, the ride becomes the most popular one, attracted 6.7 million visitors in the year 2011. It is based on the hugely successful Hollywood film Pirates of Caribbeans starring Johnny Depp.

One of the most recognizable landmarks of Paris. It was opened in the year 1889 as an entrance arc to universal exposition or world’s fair. For the next 41 years, it stands as the tallest man-made structure in the world, has a height of 320 meters. The construction of the Eiffel tower started in 1887 and took two years the complete. It was named after Gustave Eiffel, the French architect in the head of the construction of the Eiffel tower.

Around 10000 tonnes of Iron are used for the construction of the Eiffel tower. As the Eiffel tower became a globally popular structure it reconstructed in Nevada of the United States and Tokyo. The tower repainted every seven years to protect it from corrosion, demand 50 tonnes of paint. Tourists can access the first two levels of the Eiffel tower, can use the staircase or life for it.