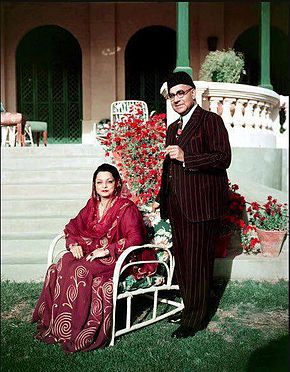 Liaquat Ali Khan was Pakistans first prime minister. He was born the 1. Oktober 1896 in Karnal Hindustan. His Mothers name is Mahmuda Begum of Rajour in Karnal, Punjab, his father’s name is Nawab Rustam Ali.

In 1910, he started in the Muhammadan Anglo-Oriental College at Aligarh, then went to college from which he graduated in 1918. After he returned to Karnal to marryRa´ana Begum, where he had a son, Wilayat, in 1919. Then in September 1919 he sailed to England and stared in St. Catherine’s College, Oxford, in January 1920.

It was in Oxford Liaquat Ali Khan started talking about politics. It was also in Oxford that he came in contact with people who were a role in Indian politics Shoaib Qureshi, M. C. Chagla and Abdur Rehman Siddiqui. Then he joined the All-India Muslim League in 1923.

On the 16 October 1951, Liaquat was in the city of Rawalpindi. He said one sentence before he was shot in the chest by Said Akbar.

His last words are said to have been: